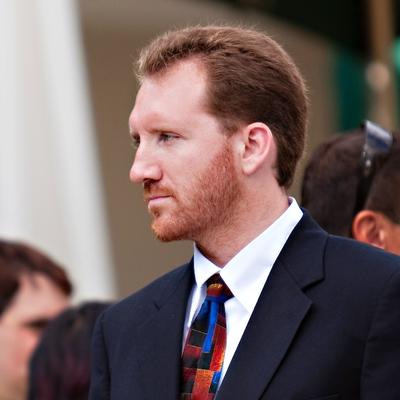 I'm a software engineer in the San Francisco Bay Area. My software contributions are mostly closed source for my professional life or low profile for my own enjoyment. I have a handful of small projects and things to be found on

GitHub (gwax). I've worked in just about every part of the stack though my focus leans pretty hard toward data layer and infrastructure these days.

Long ago, I graduated from MIT with a degree in Materials Science and Engineering (course 3 to fellow alums). During my time at MIT, I had a pretty strong focus on structural materials and computer simulations of material behavior. Subsequent to graduating, I spent a number of years[1] taking increasingly software-focused jobs but always trying to keep my focus on math, science, or the like.

Along the way to accepting that I was a software engineer, I took a brief detour to law school. I only made it through about three quarters of a year before I decided it wasn't for me. As such, I feel it's really more of a footnote issue than a body content matter.

I spent a number of years at a (now defunct) company called Archimedes, Inc. writing software and simulating clinical trials. During that time, I managed to develop a passion for healthcare technology. I've come and gone from the healthcare technology field a few times[2].

Eventually, I ended up at Google as a Datacenter Software Engineer and couldn't really keep up the illusion that I was a scientist that wrote software. It's for the best really, I like the practicality of engineering. Working at Google was an enlightening experience but, ultimately, there is a ceiling on the interest I can muster for tracking networking equipment parts in a datacenter.

I spent a handful of years back in the rich data world of healthcare, working for Clover Health, a startup (now public) health insurance company, that also happens to be a technology company. I really connected with the mission of fixing healthcare for old people by bringing 21st century technology to the data, operations, and managed care. It was hard and took a lot out of me but I really hope my efforts do something to dent the massive problem that is modern healthcare.

My next tour involved a chunk of time at Samsara, first as an engineer on Backend Platform and then building out a Data Platform team to do cross-cutting analysis across the totality of Samsara's IoT data. The mission was interesting albeit not as interesting as solving healthcare. That said, it was a great opportunity to pick up more experience leading a technical team and working with a handful of new technologies.

Now, I'm back to Insuretech, taking helm of engineering for LifeRaft. I'm glad to be solving real problems for average people again.

If you want more professional details, there's something close enough to my résumé available through LinkedIn. If you happen to want a proper résumé or other details, you'll have to email me.

Non-professionally, I have a wife, and three children, all of whom I love to a degree that exceeds my writing ability to describe.

I am an avid player of Magic: the Gathering and many boardgames.

I also fancy myself an amateur mixologist.

Some day, I hope to master the Mai Tai.

The best way to contact me is by email: waksman (at) google's well known email service.

I am open to startup advisory roles.

I am not looking for a new full time position; recruiting emails will be ignored or politely declined.

I am active, to varying degrees[3], on a number of online services:

My Internet "social" activity is generally pretty low everywhere other than GitHub and reddit.

Book 1, 79. -- There is a lesson to be learned from a downpour of rain. If you get caught in a sudden cloudburst, you will still get a drenching even though you try to keep dry by hurrying along and taking cover under overhangs of roofs. If you are prepared to get wet from the start, the result is still the same but it is no hardship. This attitude can be applied to all things.[4]

A small arctic whale. The male has a long tusk.