Once a year, I take a month off from Caffeine and Alcohol (sometimes I'll throw in something else like high fructose corn syrup). It was fairly arbitrary for a number of years but now, having learned it's kind of a thing, I tend to take my temperance in January. This time around, I've moved things up a few months and am abstaining in October.

Giving up booze, even temporarily, doesn't mean that I want to give up cocktails. Turns out, however, it's really hard to make something without alcohol that doesn't end up tasting like juice or flavored water. Seedlip is meant for this purpose and helps some but tends to fall pretty easily into the juice or flavored water trap.

Through a mix of experimenting, Seedlip recipe ideas, Aviary Cocktail Book inspiration, staring at my liquor shelf, and starting at my fridge, I've had a modicum of success. I seem to have hit on a formula that works well stirred with ice and served Up:

A Non-Alcoholic Up formula

Gomme Syrup and Garden 108 seem to work well together but I think the best that I've hit on so far is what I'm calling an Uncut Jewel: 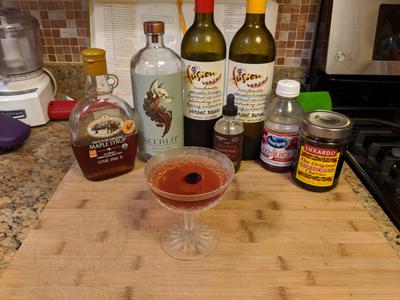 Stir with ice, serve up, and garnish with a Maraschino cherry.

The drink leads with a note of allspice before taking on dominant notes of fruit and nuts and finally closes with a hint of cocoa. Overall, it's well balanced, sippable, and fairly complex, without assaulting the palette.

I've been writing a lot of Go lately and finding it a pleasant balance of simplicity, power, functionality, and ecosystem support. In a lot of cases, I am finding the guarantees afforded by type safety to be really nice but, occasionally, the strict requirements can make some easy things much harder than I want them to be.

Recently, I found myself wanting to test the behavior of some code the hit a SQL database. Specifically, I wanted to check the results of a handful of queries with varied columns and column types. With Python, I'd approach this with SQLAlchemy, and turn the result into a list of dicts.

From here, it's pretty straightforward to assert the result matches expectations. If you're using pytest, you'll also get really clear details on where the results aren't what you expect. If you don't have the expected columns or column types spot on, you're assertion will be off but you won't hit any underlying errors at this point of your testing.

Go, on the other hand doesn't have quite as easy an option. The crux of the problem is that the only way to get a result row out of a sql query is via (*Rows) Scan, which demands you know something about the structure of the result before you query. Luckily Scan is happy to read anything into a *string as long as you're asking for the right number of values so we can write an equivalent function to the python list comprehension.

This, much like the Python above, gives us a list of maps of column name to column value, with the minor caveats that all values are strings and NULL values become empty strings. I found it a useful chunk of code, so I thought I'd throw it up.

Sure, it's more verbose but sometimes that's the price we pay for dealing with dynamic results in a staticly typed language. There are other prices paid in the other direction.

In my ongoing quest to make delicious alcoholic beverages, I have increasingly found myself digging into my ingredients. Syrups, as a class of ingredient, have received a decent amount of my attention. As an aside, if you're buying simple syrup, you are doing a lot of things wrong. In my experience, it is decidedly tricky to find decent grenadine, where decent is defined as being made with real pomegranate and without high fructose corn syrup or food coloring. So, I've started to make my own:

A pomegranate syrup that adds a sweet tartness to drinks and a distinctive red color. Notable in small quantities in a great many drinks and also as the second ingredient in a Shirley Temple, a drink the actress was apparently never fond of. 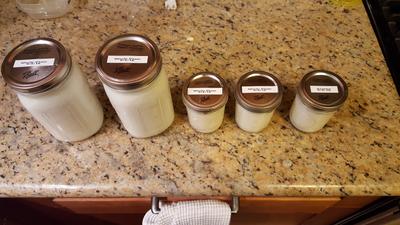 We were recently visiting my wife's aunt and uncle (my daughter's graunt and gruncle), and we had yogurt most mornings. They use an EasiYo to make their yogurt, which piqued my curiosity.

Fancy yogurt is pretty expensive at the store, upwards of $7 or $8 per 32oz container. Yogurt is just fermented milk and I've fermented plenty of things before. I should be able to make yogurt, right?

So, how about EasiYo? Turns out it's not that much cheaper.

We can do better, let's ask the Internet.

Turns out it's pretty straightforward; I just finished our second batch yesterday. It also turns out to be really good, and it's less than $2 per 32oz (milk choice depending).

UPDATE: As of September, 2017, Google App Engine will manage SSL certificates for you.

Let's Encrypt is a fantastically convenient way to get SSL certificates for your website without paying a bunch of money or resorting to a self-signed certificate. It's also pretty easy to set up.

Easy as it is to set up, the instructions don't really explain much about setup for App Engine. It turns out to be pretty straightforward.

On account of being mentioned by Reply All, I've been listening to back episodes of [TLDR]. Listening to #15 - Internet Time caught my attention and made me aware of Swatch Internet Time. It's kind of impractical but also kind of fun, especially as I've been a little annoyed at recording times across timezones for something meant to persist, like this blog.

For fun, I whipped up a quick python implementation:

Or, if you don't care about precision:

Personally, I prefer to intersperse my footnote declarations with the text that is being footnoted when writing my. For example:[1]

This is just an example.

Simply wrap in a <script> tag and include in the BODY_END section of conf.py or add it to your theme.

Continuing my earlier work in the realm of mixology, I would like to present my second cocktail invention. The invention of this cocktail is the result of playing around with gin, Chartreuse, St. Germain, and various other liqueurs in an attempt to make something tasty. This cocktail earns its name, Will O' The Wisp, from its faint, ghostly, green color.

The Herbsaint/Absinth can be skipped, though I don't recommend it. The Lavender Bitters are also optional but very highly recommended. I would recommend stirring this cocktail (instead of shaking) as the resulting beverage has a very different appearance.

Some number of weeks ago, having discovered Maraschino liqueur, I concocted a variation on my beloved Manhattan. I have been meaning to write up the recipe here for a while but had been stuck on coming up with a name; I needed a name befitting a strong whiskey cocktail with connections to myself and the color red. Having thought for quite a while and come up with a bunch of names that were already taken by other cocktails, I settled on naming the drink after the grizzled, old Autobot, Ironhide. So, without further ado:

Serve shaken or stirred with ice in a cocktail glass; garnish with the Maraschino cherry.

I have mostly been drinking these on the rocks, which is an acceptable but inferior variation. Being a Manhattan-like cocktail, up-high is really the correct way to serve an Ironhide.

Corn syrup based grenadine or "maraschino" cherries will ruin the flavors imparted by the bitters and Maraschino; you will make a better cocktail by skipping the grenadine and cherry than using cheap, fake ones.

I came across a cute geometry problem recently and I would like to pass it along.

If the sides of the square are of unit length and all curves are circular arcs, what is the area of the highlighted region?

Although substantially easier with the use of calculus or trigonometry, this problem can be solved entirely with basic geometry (no weird laws you might have forgotten since high school are necessary).

I have derived a geometric solution, which follows, but I highly recommend trying to do it yourself first.